This page will give you a basic understanding of the following formulas commonly know as the six functions of a dollar:

Future value (FV) refers to the amount of money that an initial amount (PV) will grow to over some period of time (n) at a given interest rate (i).

There are two alternative methods of calculating interest on the initial amount. These are simple interest and compound interest.

The borrower pays the lender interest at regular periods within the term of the loan plus the principal and a single interest period payment at the end of the term. In this case interest accrues only on the original principal sum and does not compound.

The simple interest formula can be expressed as:

The borrower pays the lender a single sum at the end of the loan term. This sum includes the original principal plus interest on accumulated interest from previous periods.

It should be noted that compound interest is simply a repeated application of simple interest to the new principal amount. In order to make a compound interest calculation reasonably quickly it is necessary to use the following formula which considerably reduces the calculations involved in the preceding example:

Discounting – The present value of a single payment 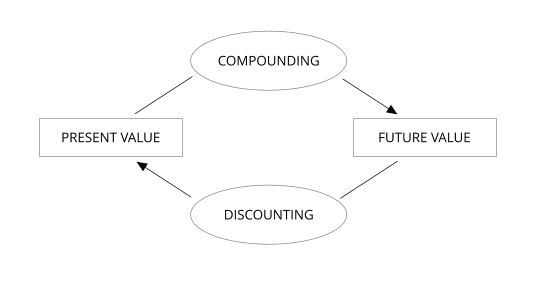 The above diagram illustrates that discounting involves the reverse of compounding. With discounting we are calculating the present value of a sum given a known future value.

To prove the relationship between compounding and discounting, let us take the present value sum of $1,366.0269 and compound this forward for four years at 10%. Thus:

Future value of an annuity

The future value of an annuity can be represented by the formula:

As interest is normally paid at the end of the period rather than at the beginning almost all the annuity tables are calculated on this basis.

For example: Let us suppose that an investor sets aside the sum of $100 every year at 5% interest rate. What will be the future worth of this sum in 20 years' time?

Present value of an annuity

This table is widely used in valuation and investment procedures to find the present value of a series of equal payments.

For example: The terms of a five year lease are such that there is a rental payment of $1,000 per annum. The problem is to ascertain the present worth of this income stream given an interest rate of 5%.

This is used for working out the amount that will need to be set aside periodically so that, when compounded at a given interest rate, it will accumulate to a specified future sum.

This is the reciprocal of the future value of an annuity.

Thus, as the sinking fund factor is a reciprocal of the future value of an annuity, let us take an annuity of $180.974 and compound this forward at 5% per annum.

The purpose of this factor is to provide the period payments of capital and interest required to pay off or amortise a given principal sum in a given number of periods.

For example, if we have a 20 year table mortgage of $10,000 with a 10% interest rate, we need to be able to work out the annual payments of interest and principal. The factor that we derive, when multiplied by the original amount of the loan, will give us the annual installments of principal and interest. The formula for amortisation is the reciprocal of the present value of an annuity.