How to construct a paragraph

This interactive online tutorial will help you learn how to structure paragraphs effectively.

After the introduction come the body paragraphs. They usually take up most of the essay.

The acronym PIE (which stands for Point/Illustration/Explanation) may be helpful to remember as a guide for developing well-structured, coherent paragraphs. Academic paragraphs are usually at least three sentences long, but can be longer. However, don't make those sentences too long. As a rough guide, a sentence longer than three lines is too long.

All paragraphs should be focused: they should discuss only one major point. That point should connect with the overall focus of the essay (as described in the thesis statement).

Body paragraphs will often begin with a summary of the controlling idea: the point (also known as the topic sentence). The point (or topic) sentence summarises the paragraph in the same way that the thesis statement summarises the whole essay.

The rest of the paragraph supports that main point (the topic sentence), by explaining it in detail, giving an example, or citing evidence that reinforces it. 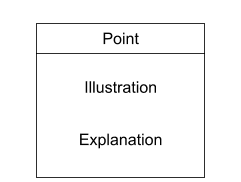 The largest part of any body paragraph is the illustration, which consists of supporting evidence and examples. Illustrations use logic to fully explain the main point raised in the topic sentence. It is not enough to just explain an idea, however: you need to show that outside evidence supports it as well. The illustration can include

Illustration  must be relevant to the topic and it must be used and credited properly.

Outside sources can be quoted, summarised, or paraphrased. For information on the right and wrong ways to do this, see quoting and paraphrasing. Crediting outside sources is known as referencing, and is described in detail in the section titled introduction to referencing.

The explanation should clarify how the reader should interpret your illustrative evidence and also how the paragraph's controlling idea works to support the thesis statement.

Remember that body paragraphs do not exist in isolation. They should fit together like a jigsaw puzzle. Transitions show the connections between paragraphs themselves, and the connections between the paragraphs and the overall focus of the essay. They often appear at the end of a paragraph.
Transitions are essential for maintaining momentum in your essay and showing the reader how all the ideas fit together. They are described in detail in the next section, essay flow.

Have a study or assignment writing question? Ask an expert at Academic Q+A